The official plug standard in the United Kingdom since 1962 is the BS 1363 plug. (The previous plug standard was BS 546, still found in older buildings.) The BS 1363 plug is also used in Ireland, Hong Kong, Malaysia, and Singapore. British standard BS 1363 requires use of a 3-wire grounded and fused plug for all connections to the power mains (including Class II, 2-wire appliances). The BS 1363 plug contains a BS 1362 fuse, which is designed to protect the cord and branch wiring back to the branch circuit protector installed in the building. British power outlets incorporate shutters on line and neutral contacts to prevent someone from pushing a foreign object into the socket.

The United Kingdom is the only country that requires a fused power plug. The British use a ring wiring system 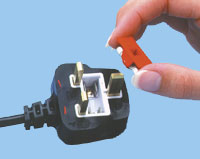 In the British ring wiring system, a fault condition at an outlet, for example, will be sourced with current from both directions. This minimizes the amount of heat generated in the conductor, as the fault condition occurs, but before the circuit protection device can clear the fault. By minimizing the heat generated, the degradation of insulation (which accompanies overheating due to repeated fault conditions) is also diminished, improving the long-term safety of the insulation system.

Until the circuit protection device clears the fault, however, the fault condition is sourced from two different directions in the supply system. There is therefore a much greater potential fault current condition. The British feel that a secondary protection device at the plug minimizes the safety hazard this condition creates; hence, the power plug fuse.

The fuse installed in all British plugs conforms to BS 1362 (“General purpose fuse links for domestic and similar purposes…”). The size of this fuse is 6.3 x 25.4mm. It has a breaking capacity rating of 6000A and is constructed with a sand-filled ceramic tube. The time-current characteristic on this family of fuses is not necessarily consistent with any other international standard, but it appears to have most of the characteristics of a fast acting fuse. The British Standards Institution standard for fuses in general is BS 4265.

Appliances tested and approved by British agencies can only use approved plugs, and these are tested by ASTA-BEAB to BS 1363. ASTA requires that their mark be molded into the plug.The plug is rated from 3–13A/250VAC, depending on the fuse. Standard Interpower™ British cords and cordsets are approved by ASTA and carry the ASTA-BEAB.