More Information on Plugs and Sockets

For equipment to be connected to an alternating current (AC) supply, there are two choices: hard wiring or a power cord or cord set assembly. Hard wiring, which is making a direct connection to the electrical circuit, takes a qualified electrician to connect/disconnect the equipment. A power cord or cord set assembly provides the user with a method of powering up the equipment correctly and safely by easily attaching/detaching the plug to/from an appropriate mains socket outlet.

When electricity was first introduced in the late 19th century, it was mostly used for lighting purposes. Household appliances began to be invented in the early 20th century, new ways of connecting to the power supply needed to be created. That resulted in individual countries developing their own style of plugs and sockets. There were early efforts dating before World War II to try to initiate one plug pattern globally, but the idea never caught on. Discussion in the 1950s regarding the standardization of one plug worldwide basically came too late, as many countries already had their own electrical connections in the homes and businesses and were not willing to change over to a new plug design.

Today, manufacturers designing for global markets need to be aware that there are many different plug patterns. They will need to determine which one is used in the country they will be exporting to. It is important to determine which plug is the correct one so that it safely connects to the power source. Most plugs and sockets follow national and/or international standards which dictate physical and electrical characteristics, plus many countries have testing/certification agencies which state specific plug/socket requirements that need to be followed. Interpower offers assistance in choosing the correct plug pattern with the Guide to Worldwide Plug and Socket Patterns and Power Mains (Single-Phase). This guide gives the most frequently specified plug patterns for electrical or electronic equipment used in individual countries.

Key Elements in the Product Design

It is important to determine the following about plugs and sockets when designing and building a product.

In addition to different plug patterns being available, there are also different voltages and frequencies that come into play, varying in different areas of the world.

In many industrialized countries, voltages run on 120V or 230V (except for Japan which uses 100 volts), but voltages can run between 100-250V. Some countries use multiple voltages.

A plug and socket have a maximum voltage and amperage rating. The ratings are determined by national and/or international standards. They are set for safety purposes and are often higher than the actual voltage measurement at use. For example, if a Continental European plug is rated for 16 amps at 250 volts, it is unlikely that there will be a constant current of 16A at 250V flowing through the electrical connection. European voltage is standardized at 230V. In the United States, the National Electrical Code sets the standard for the common household use to be 120VAC.

Class I and Class II

Even though some electrical systems in developing countries may be ungrounded, it is not recommended to cut off the ground pin of a Class I plug so that it can fit into a two-pole, ungrounded socket. This eliminates the safety ground connection and will cause the plug or socket to lose its approval. It is better to use a Class II plug on a power cord or cord set, than alter a Class I assembly.

Polarized can have two meanings: electrical or pin. Electrical polarization means there is a standardized method of wiring the plug or socket to circuit wires. The circuit wires need to connect correctly to the line, neutral, and ground contact points on the plug and socket. The components mirror the electrical circuit. Pin polarization means there is a dedicated alignment of the pins—there is only one way of the plug fitting into the socket. Note: Even though a plug is pin polarized, it doesn’t necessarily mean it is also electrically polarized.

All polarized and non-polarized plugs will fit into a polarized socket, but polarized plugs will not fit into a non-polarized socket. The need for one or the other is equipment specific—what is required within the equipment internal circuitry. It depends on if the requirements of the end product need a defined electrical path of the line current, or whether it doesn’t matter which leg of the power is connected to the internal circuitry.

It’s also essential to include the correct plug and socket in the product design in order to follow the specific standard of the country of export. In most countries, approval documentation is needed in order for the final product to be accepted into that country.

National Electrical Manufacturers Association (NEMA) has a variety of standards for electrical manufacturers. This is so that consistency and safety can be achieved. A numbering system has been created to standardize the description and rating of NEMA plug and socket patterns.

The first identifier can be blank or have the letter “L.” This determines whether the device will use straight or locking blades.

The second identifier is a number which determines the voltage rating. For example:

The fourth identifier is a letter. “P” stands for a plug and “R” stands for a receptacle (also referred to as an outlet or a socket).

The UK system for plugs and sockets began before World War II during a time when there was a shortage of copper for cables. This ring main system was devised to help decrease the amount of copper needed for the cable wiring inside houses and buildings.

Part of the purpose of this system is so that the earth circuit can handle the current that could blow the fuse in the plug due to a sudden short circuit. The circuits leave the local branch protection device, travel out to the loads (outlets or lamps, for example), and then return to the circuit protection device. 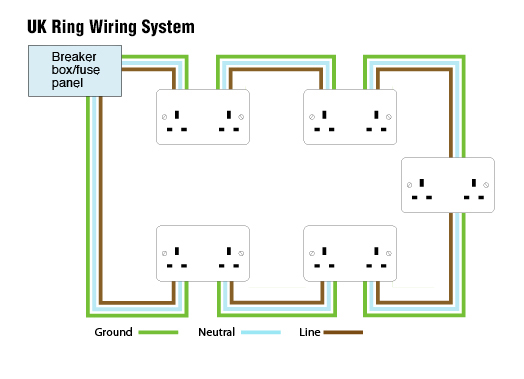 A fault condition at an outlet, for example, will be sourced with current from both directions. This helps to minimize the amount of heat generated in the conductor, as the fault condition occurs, but before the circuit protection device can clear the fault. By minimizing the heat generated, the degradation of insulation (which accompanies overheating due to repeated fault conditions) is also diminished, improving the long-term safety of the insulation system.

Until the circuit protection device clears the fault, however, the fault condition is sourced from two different directions in the supply system. There is therefore a much greater potential fault current condition at the socket/cord junction. A secondary protection device at the plug helps to minimize the safety hazard this condition creates; hence, the power plug fuse.

The fuse installed in UK plugs conforms to BS 1362. The time-current characteristic on this family of fuses is not necessarily consistent with any other standard, but it appears to have most of the characteristics of a fast-acting fuse.

It is essential to offer products that are easily adapted to the needs of the market of export, without requiring reconstruction by the user. Customers today expect to unpack and start to use a product as is, so knowing the electrical requirements of where the product will be used is crucial.

Plugs can be molded or rewireable. Molded (non-rewireable) parts cannot be modified after they are manufactured. A rewireable part can be disassembled and wired again after its initial assembly to a different cable.

Interpower carries a variety of plugs and sockets that are designed to meet electrical needs around the world. Most plugs are available as part of a molded power cord or cord set and many are available as rewireable. Product specifications can be found on the website for each of the plugs and sockets available through Interpower. These may include dimensions, panel cutouts, wire strip lengths, proper wiring information, flammability ratings, and maximum ratings for amperage and voltage. Most Interpower products have agency approvals.