In the United States, the National Electrical Manufacturers Association (NEMA) has a variety of standards for electrical manufacturers. ANSI/NEMA WD 6 is the standard that defines NEMA configurations, including the NEMA 1-15.

Polarized can have two meanings: electrical or pin. Electrical polarization means there is a standardized method of wiring the plug or socket to circuit wires. These circuit wires need to connect correctly to the line, neutral, and ground contact points on the plug and socket. The components mirror the electrical circuit. Pin polarization means there is a dedicated alignment of the pins—there is only one way of the plug fitting into the socket. Note: Even though a plug is pin polarized, it doesn’t necessarily mean it is also electrically polarized.

All polarized and non-polarized plugs will fit into a polarized socket, but polarized plugs will not fit into a non-polarized socket. The need for one or the other is equipment specific—what is required within the equipment internal circuitry. “It depends on if the requirements of the end product need a defined electrical path of the line current, or whether it doesn’t matter which leg of the power is connected to the internal circuitry,” explained Mike Winders, Product Development Specialist at Interpower.

The NEMA 1-15 plug can be polarized or non-polarized. 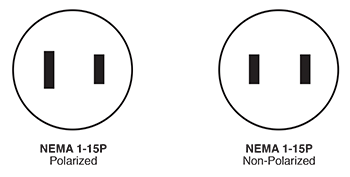 With a NEMA 1-15 polarized plug, there is no ground terminal, only line and neutral. The neutral blade is wider than the line (hot) blade is. In the socket, the slot is wider. “If all the wiring is done to the national code, the neutral polarity is connected in a known condition. Often times, the chassis of an appliance will be connected to this leg which acts as a ground path for the appliance, like a mixer or a toaster,” Winders said.

A NEMA 1-15 non-polarized plug means that the connection of neutral is not held in a known condition—it does not matter in the end product which is line and which is neutral. This might be an electric alarm clock or an electric razor, for example, where it is not necessary to ground the chassis of the product.

“Many products may carry the polarized plug even if they are not required to. The cost will be nearly the same,” Winders added. “Using a polarized plug can give the product design engineer the ability to know which is line and which is neutral.”