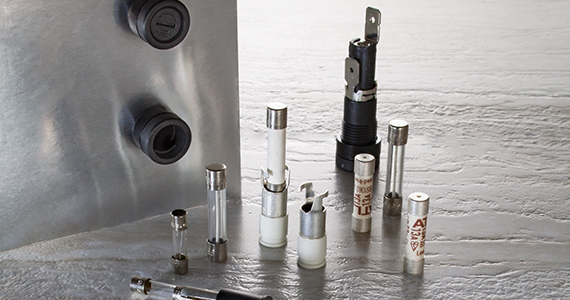 Electronic equipment is often designed with built-in circuit protection. The main function is to provide protection to both the equipment and the equipment operator in the event of a circuit overload. This protection usually comes in one of two forms: a circuit breaker or a fuse. A circuit breaker is an automatic switch that prohibits the flow of electric current when it is rapidly overloaded or unusually stressed. A fuse is a safety device that protects an electric circuit from excessive current.

A fuse is a replaceable circuit protection device that provides protection to both the equipment and the equipment operator in the event of a circuit overload. The essential component in a fuse is a metal wire or strip that will melt when the current exceeds the amount that the fuse is designed to withstand, opening the circuit path, and disconnecting the equipment from the power source. When a traditional fuse disconnects, or “blows,” it must be removed and replaced with a new fuse. While there are many different kinds of fuses available, these are the ones that Interpower offers.

A fast-acting fuse will open on overload and short circuits very quickly. These fuses are used in equipment where there are no transient in-rush currents. They offer protection for equipment that cannot withstand current overloads, even briefly. Fast-acting fuses are typically constructed with a single strand of wire or strip of metal.

Time-delay fuses are designed to withstand a heavy amount of current overload for a limited amount of time. They are used in equipment that can sustain a brief overload situation; typically where loads are inductive, such as equipment utilizing fans, transformers, etc. The construction of time-delay fuses usually utilizes a coiled wire, a thick filament wrapped in wire, or a spring for the element.

Similar to North American time-delay, the fuse allows the overload to exist briefly before blowing.

A minimal ability of the fuse to remain physically intact when overloaded. A low-breaking capacity fuse is readily subject to being physically destroyed if the current surge is great enough.

A high level ability of the fuse to remain physically intact even when the overload is great. The fuse is usually constructed with a ceramic body, rather than glass, and filled with silica sand to absorb a large overload and protect the fuse itself.

Example of a UK Fuse

A fuse holder is mounted in the equipment and is designed to hold the fuse. Interpower offers panel-mounted fuse holders that, when paired with the appropriate fuse carrier, can hold North American and international sized fuses.

Two Examples of a Fuse Holder Offered by Interpower

Two Examples of a Fuse Carrier Offered by Interpower

A fuse clip is for internal fuses on PC boards. It takes two clips for one fuse. Fuse clips are an alternative to fuse blocks, with many of the same features. A fuse clip offered by Interpower comes in one size. It is PC-board mounted and accessible only from within the equipment. It has a “stop” on it, to help position the fuse when it is being inserted.

An Example of a Fuse Clip